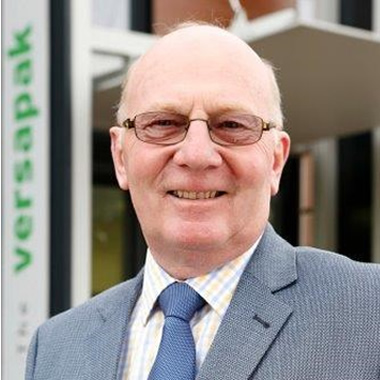 Ian Denny Anderson is the Chairman and Owner of Versapak.

Versapak UK was established in 1973 by Ian, in a small office above a restaurant in Chislehurst, Kent. Father of two and entrepreneur to not only a business, but a Ski-School and Rock Band, Ian launched Versapak and its namesake product, the Versapak; a simple, yet effective reusable security mailing pouch. The Versapak range of products became known for being durable, secure and cost effective, and was soon widely accepted by postal authorities and courier companies throughout the world.

The Versapak business flourished in the UK and after a few years started to expand selling to many countries around the world. Versapak International’s UK HQ is based in Erith, Kent where we have a very active sales and marketing office and warehouse. Versapak Europe has a sales office and warehouse in Haan, Germany and was established in 1998. The Versapak Group own manufacturing facilities in Romania and has been operating since 2001.

1977 - Began international expansion, trading in many countries around the world

Can’t find what you are looking for?

Can’t find what you are looking for?

CONTACT US
Versapak
We are Versapak International Ltd and we help businesses store and transport documents and sensitive items. Our reusable and tamper evident bags, cash bags and varied use security seals are used by leading companies in many industries throughout the world.
The Versapak Centre, 4 Veridion Way
Erith
Kent
DA18 4AL
United Kingdom