We use cookies to help give you the very best shopping experience on our website, including finding the right products for you and making suggestions to improve your purchase. These essential functionalities help us improve our quality of service to you. For more details, see the GDPR, Privacy & Cookie Policy.

Jumping on (and then promptly off) the Oxo-Biodegradable plastic bandwagon 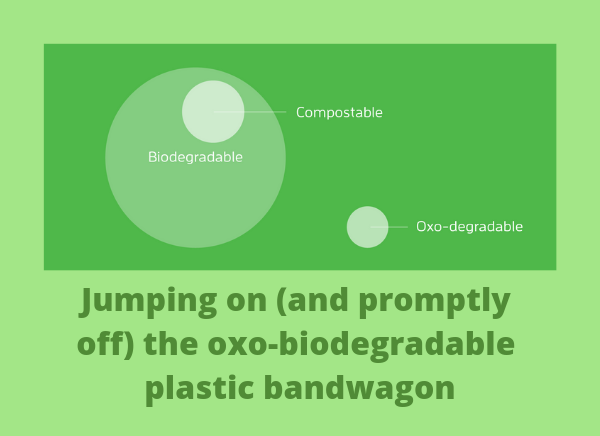 If Oxo-biodegradable plastic had a tinder profile, we’d swipe left

Plastic is everywhere - but what’s great is that the awareness people have of its negative effects has grown (much like the sheer output of plastic waste). However, progress is still being made to reduce this harmful pollutant – as illustrated by Nepal although many are still yet to jump on the bandwagon despite breakthroughs coming from the likes of Oxo-Biodegradable plastic

According to the BBC, one company produced plastic ‘biodegradable’ bags, claiming that these break down in the environment like a leaf, but quicker’ and even though this technology is widely used in Africa and the Middle-East, its facing a possible ban by the European Commission. But why ban something that is seemingly good for the environment we hear you ask?

Additives in these plastic bags create smaller pieces of plastic that don’t really end up degrading at the reasonable rate with which they were advertised to! The definition of biodegradability alone tells us that such a practise is definitely not worthy of calling itself biodegradable:

“No additives are needed and no fragments remain in the environment”

European bioplastics state that Oxo-biodegradable plastics are falsely marketed as a solution to the plastic waste and littering problems faced by countless countries. The same company also state that there’s no evidence suggesting that plastic fragments will undergo full biodegradation within a reasonable timeframe.

We came across another company who recently announced their security seals are biodegradable; although after some digging, our marketing executive found that the special additive they use (additive 201 containing PP – Polypropylene) to make their additive belongs to the Oxo-biodegradable plastic family, which means that these plastics will actually cause the material to become brittle and break into fragments – so we see this as 1 step forward, 2 steps back. We’re pleased to see companies actively trying to do well with sustainability, but more knowledge of recycling and plastic is needed if companies are actually to become greener.

Here at Versapak, we’re doing what we can for sustainability and have some very exciting things in the pipeline for 2019 to add to some of the great things we’re doing already such as the Recycle Your Seals initiative – and if you’d like to join this scheme, you can! Simply get in touch, here and make your organisation a greener one today!

Do you want more information?
Request a call back today

CONTACT US
Versapak
We are Versapak International Ltd and we help businesses store and transport documents and sensitive items. Our reusable and tamper evident bags, cash bags and varied use security seals are used by leading companies in many industries throughout the world.
The Versapak Centre, 4 Veridion Way
Erith
Kent
DA18 4AL
United Kingdom